Getting To This Place Is Extremely Difficult… But 8-10 Hours Later, It’ll Blow You Away.

Overlooking a scenic fjord in Norway, high up in the mountains is ‘The Trolls Tongue’, or Trolltunga. This oddly shaped rock formation that got its name from folk tales is one of the most spectacular scenic cliffs in Norway. Trolltunga is situated about 3600 feet (1100 meters) above sea level, hovering 2300 feet (700 meters) above lake Ringedalsvatnet in Skjeggedal. The view is simply breathtaking from up there, and to experience it you have to hike through high mountain trails, which takes 8-10 hours in total (to Trolltunga and back down).

Trolltunga or The Troll’s Tongue in English gets its name from the oddly shaped rock formation of the cliff.

To get up there, you’ll pass waterfalls, luscious green vegetation and steep mountain ridges, but the reward is simply breathtaking.

As you stand on the rock taking in the view across the Folgefonna plateau glaciers, you’ll feel on top of the world.

The cliff was formed during the last ice age, approximately 10,000 years ago, when glacial water froze huge chunks of the mountain and then broke off.

This left this beautiful, yet strange looking rock outcropping.

Thousands of visitors come each year to sit “on top of the world,” and with no safety rails, Trolltunga is one of those “bucket list” experiences that’s not for the faint hearted. 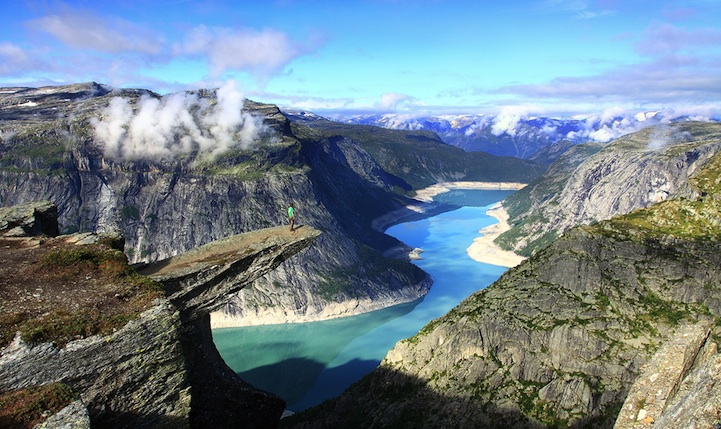 That view from up there is absolutely breathtaking, but I don’t think I’d ever be crazy or brave enough to jump on that cliff like those people. They have my respect for being such fearless daredevils. Share this incredible creation of mother nature with your friends below.