When 7 month-old Finn Jordan was being abused by his babysitter, no one was around to report her. No one but the family dog, that is. Killian, a shepherd mix, suddenly started acting violent towards the babysitter, alerting Finn’s parents to danger. He was normally a friendly dog so they knew something was up.

After the dog tipped them off, the parents left an iPhone in the room with Finn and the babysitter, recording what happened. When they came back to check the recordings, they heard crying, verbal abuse and slaps.

Alexis Kahn would swear at Finn, slap him and generally wasn’t the decent human being she pretended to be.

Killian started acting violent towards Alexis. He was normally a very friendly dog, so Finn’s parents knew something was up. 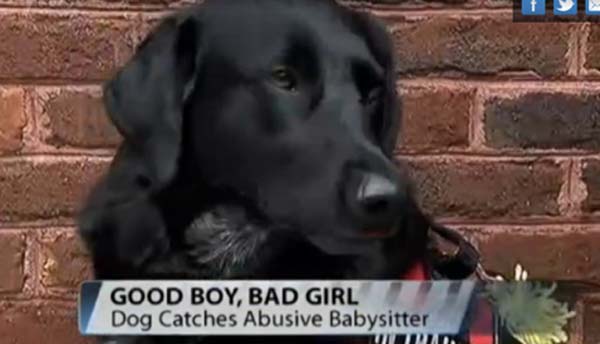 Now, thanks to Killian, the little boy is safe… and the abusive babysitter Alexis Kahn is behind bars.

Previous Post: Uh oh: Did CNN let noted gun expert Piers Morgan write its chyron text?
Next Post: A Town Where “The Walking Dead” Was Filmed Is Being Sold On eBay