If You Thought Your Baby Photos Were Awkward, Be Grateful You Didn’t Do This.

We know that photo trends can come and go. The selfie endures, but the bathroom selfie is generally considered bad form. Before this, a slew of MySpace-related techniques existed that, in retrospect, were part of a shameful time.

One of the stranger photo trends happened back in the early days of photography. It wasn’t as morbid as the post-mortem photography that was all the rage in the 19th century, but it still looks really creepy. It was also unintentionally hilarious.

During this time, the photography process was slow, taking several minutes for an image to develop. That’s why so many Victorian-era portraits look so stiff and people aren’t usually smiling. Besides having the formal connotations of a classic portrait, it would also hurt your face to hold a big “cheese” smile for upwards of five minutes.

Adults could keep still, but young children…not so much. Smaller children had to be kept from fidgeting during the long exposure times, and who better to keep everyone calm than mom? Moms, however, wanted the photo’s focus to be on the kids, and so they would stay hidden. Kind of. They would drape a sheet over themselves, resulting in awkward-looking, if not a little creepy photos.

Twitter/Margaret Graham
This kid needed some help keeping her head still for her portrait, but the photo was saved thanks to mom, who cleverly disguised herself as a floral-print bear.

Twitter/anastasis
This mom didn’t even try to disguise her human shape, and the result looks like a hostage situation. 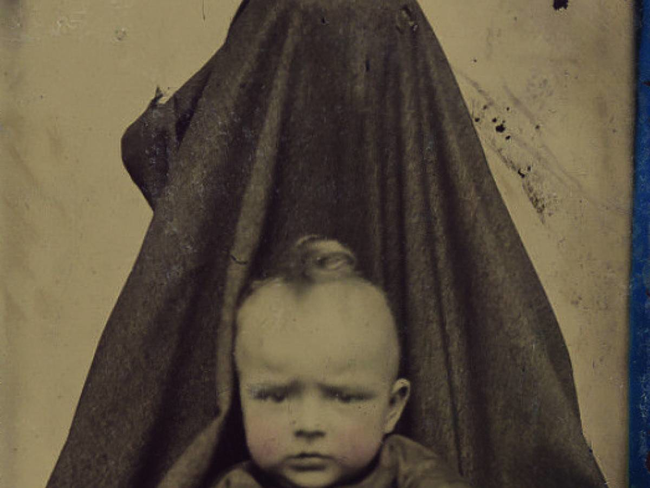 Huffington Post, via Pinterest
As bizarre as it looks, it seems like mom’s presence kept the kids calm for the photos. But it seems like they could have forgone the whole weird sheet thing and had a mom-and-baby portrait. Of course, maybe there’s some element of Victorian humor that was lost over the ages.

babble.com via Pinterest
This mom was more careful about the camouflage, hiding her shape (mostly) behind this thick curtain.

Daily Mail, via Pinterest
The little boy on the left is not having any of this. If you think kids rolling their eyes at their parents’ antics is a new trend, think again.

togtech.com via Pinterest
The “hidden mother” wasn’t just implemented at home, but in professional studios as well. It might be a blemish on the photo, but it kind of looks like this mom has an eye hole to keep watch over her kids. 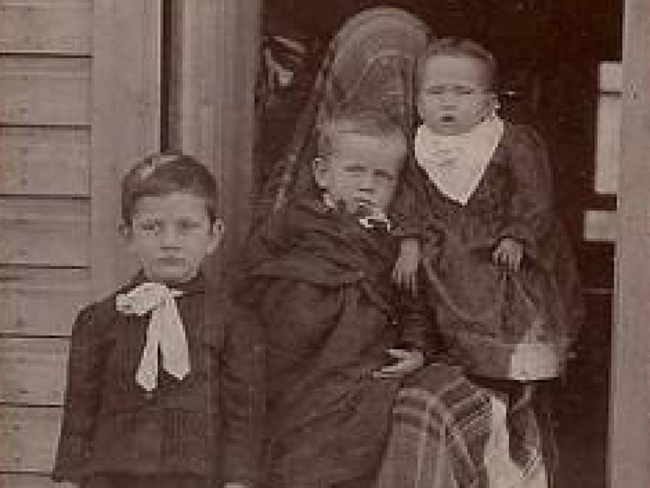 retronaut.co via Pinterest
Just hanging out with the plaid ghost that haunts our house. Nothing weird about that.

ridiculouslyinteresting.com via Pinterest
“Our house has a floral ghost.”

babble.com via Pinterest
It’s not very subtle, but at least the draping over this mom is artistically done.

The Guardian, via Pinterest
Choosing a black drape is a good way to fade into the background. Of course, it helps if the rest of the background is black, too.

foter.com
This photo probably worked out the best, with mom cleverly disguised as some kind of chair.

In an effort to make themselves less visible, the shrouded moms end up dominating the scene with their bizarre ghost look. So the next time you find that awkward family photo, remember that things could be way worse. Alternatively, if you’re not feeling photogenic one day, grab a bed sheet and revive this old tradition.

Previous Post: Half Way Through This, I Totally Broke Down. I Don’t Want To Spoil It, So Just Get a Tissue And Look.
Next Post: Man Dresses Up As A Homeless Person And Gives $20 To Those That Help Him.