Wait. Is Springsteen singing a song about Obama now? #LibsAreSoCreepy

Yes, yes he did, while campaigning for Obama today. 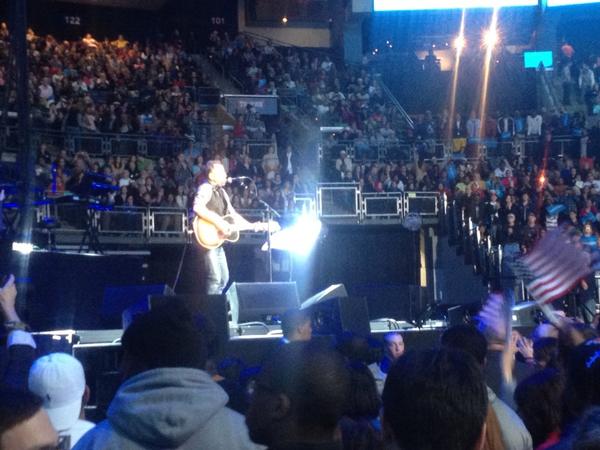 Obama’s laser-like focus tweeted it out, too.

We wish it just ended with that picture (which would be bad enough); Alas, it did not. The song? It happened.

Bruce Springsteen will fly on Air Force One from Madison, WI to Columbus, OH but will find his own way to Des Moines for final rally.

Springsteen song at WI rally: “Usually this time of day I’m in my pajamas/Let’s vote for the man who got Osama.”

Oh, dear. As Twitchy reported, he debuted this “song” last month. Who would have thought that he’d actually keep singing it? In public, no less. Lesson not learned, huh, Bruce? To be fair, at least he didn’t pull a Russell Crowe and call Obama “the light and the future.” At least, we don’t think he did. Please say it ain’t so.

The mocking was swift.

@markknoller What rhymes did Springsteen use for other Obama adjectives? Things like “villain” or “murderer” or “anti-American”?

That wasn’t Springsteen and Obama’s only fail, believe it or not.

Whoops! Y’all don’t have the same draw this time around, do you? And the trifecta of fail:

Springsteen: The First Debate Really Freaked Me Out… drudge.tw/SOQ1sD

Good grief! He is just like the other Obama cultists who were “deeply shaken” by The One’s debate performance. Oh, dear: Now we’ve been reminded of that and cannot stop gasping with giggles. Thanks, Bruce!

Springsteen’s about the same age as Romney. He’d draw bigger crowds at a retirement community than a college town. #EverybodysGotAHungryAARP

Obama’s in Madison with Bruce Springsteen? Never been so thankful to be in class.

Or about Benghazi RT @barackobama: President Obama in Wisconsin: “I cannot imagine not being fired up after listening to Bruce Springsteen.”

Actor Rob Lowe gets in on the action.

Flash poll: Bruce Springsteen/Jay-Z are up 2 points in Ohio!!

Man of the people! Obama is so “in touch” that he needs Bruce Springsteen to speak-sing for him.

It’s pretty sweet that you got Jay-Z and Bruce Springsteen but do you have any jobs or a way to lower the national deficit? Just wondering.

And a bit of yummy irony: Maybe Bruce can write a song about it!

Delicious irony RT @feliciasonmez: Per flight crew, after Election Day Romney’s charter jet is next set to be used by … Bruce Springsteen

More, please, Twitter. As for you Mr. Springsteen? No more thinkies. Thanks!

Even Springsteen couldn’t fill a stadium for President Empty Chair.