Matt Drudge doesn’t tweet often (and even then his tweets don’t necessarily hangaroundlong), but he seems particularly happy to feature at the top of The Drudge Report today a New York Times piece suggesting that Lena Dunham of HBO’s “Girls” doesn’t seem to be working out as a mini-Hillary surrogate on the campaign trail.

Dunham, who in mid-December tweeted how excited she was to be asked to stump for Clinton on the road in January and beyond, did bring her “millennial cred” to New Hampshire and Iowa, but we’re not sure how effective her campaigning was. While Clinton is an old-school feminist not above planting a question about equal pay with ayounggirl at atown hall, word is that Dunham teared up speakingof the “horrific gendered attacks” that Clinton has survived.

The New York Times notes that these are different times, and women attending a Clinton speech on a college campus where neck touchingis considered sexual batteryare having trouble reconciling Clinton’s shielding of her husband from “bimbo eruptions” and standing by her man after a very public affair with a young intern. Clinton’s trying to get with the times

But how about that photo of a tireless Dunham. Fired up! 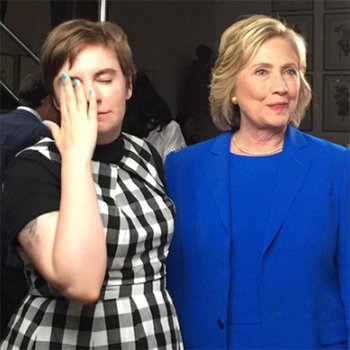 Previous Post: ‘Ultimately, I am responsible’: Christie going to Ft. Lee to apologize to those affected by ‘Bridgegate’
Next Post: They don’t math: Is this CNN poll graphic the best (or worst) oops ever? Hint: Yes [photo]