The Animal Kingdom Is A Weird Place With Weirder Survival Strategies. Yikes.

“Survival of the fittest.” According to science, that’s what happens in the animal kingdom. Only those that have the ability to adapt and survive will live to pass on their genes. It’s also called “natural selection.” This process can be majestic or intense, but it can be really, really freaky, too.

Kagoshima Aquarium
Japanese sea catfish use sensors to locate their prey—small sea worms called polychaetes, by seeing when they exhale carbon dioxide, and thus lower the pH level of the surrounding water. Talk about creating your own destruction. 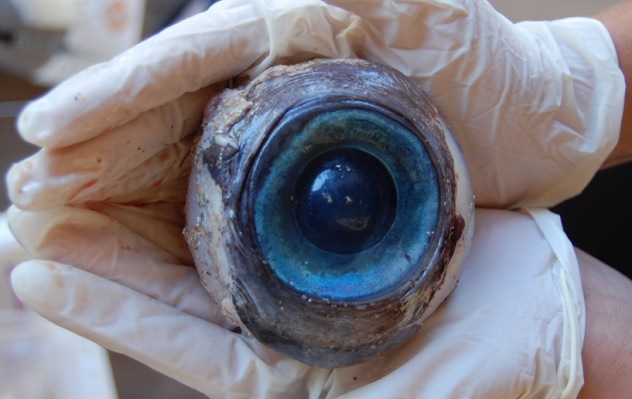 Florida Fish and Wildlife Conservation Commission
This is an eyeball. It’s actually heated by a muscle especially designed for this task. This allows him to have far better sight than anything else swimming around.

3.) The Lionfish Will Act Coy

Lionfish have been able to trick their new neighbors in the Atlantic Ocean into thinking their docile creatures by fanning their fins in a certain way. That may sound crazy, but it’s allowed to them nearly wipe out many native species and start an epidemic in the fish world.

There’s no way to describe the awesome turn of events here. Except to say, David really did beat Goliath.

Lacking a brain, these creatures operate fully on instinct, and that instinct tells them to move imperceptibly slow. Slow enough to take it’s victims by surprise, until it’s too late.

This one uses it’s arms to literally fish in the deepest parts of the ocean. In a sense, the ends of his own arms are the bait, attracting the smallest creatures to think they’re about to get the meal of a lifetime, until they themselves become the meal.

Lacking teeth, a pod of these whales will use bubbles to herd large quantities of herrings, krill, and other small prey for food.

Scientists recently learned that crocodiles are anything but lazy, and will often lay for hours among sticks and debris to hide themselves from birds and animals alike. Then, while underwater they’ll feel even the slightest vibration of the water and pounce for the perfectly timed meal.

The moray eel uses a second set of jaws to reach up, grasp its prey, and swallow it whole. Whoa.

The sea star crawls blindly across the ocean floor to melt it’s prey. If that doesn’t give you nightmares, I don’t know what will.

Wow. I won’t be messing these these guys any time soon. Humans may not be able to un-hinge our jaws, but we can at least stay inside and order pizza.