You Eat These 15 Foods Every Holiday Season, But Do You Know Where They Came From?

We all have our favorite holiday dishes. Every Thanksgiving, Christmas, and Hanukkah, we indulge in tasty treats that send us on nostalgic trips back in time to when we were kids and didn’t have to decide between paying rent and giving awesome gifts every year.

But how much do you really know about pumpkin pies, candy canes, and latkes? Where did they come from, and why do we eat them during the holidays? Let’s find out. 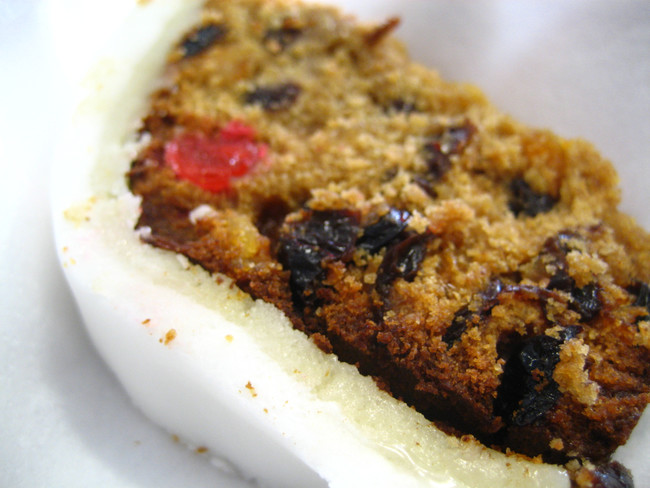 Nothing says “I can’t cook or bake, and I had no idea what else to bring to Christmas dinner” quite like a nice, heavy fruitcake. This cake, which is full of dried fruit, spices, and nuts, has become something of a Christmas mockery. Back in the Middle Ages, however, dried fruit and nuts were super expensive, so they saved the preparation of this little indulgence for holiday festivities. 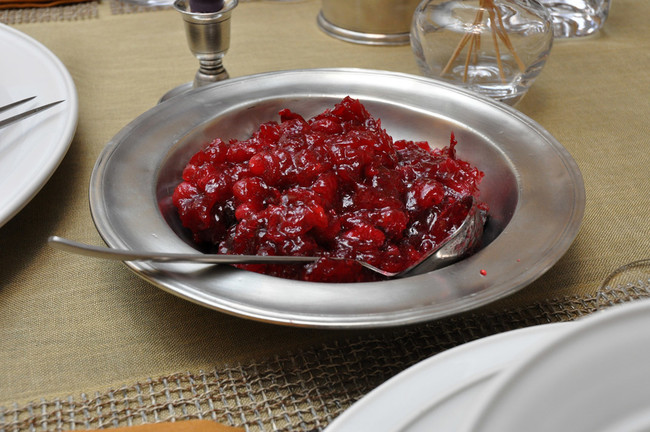 This polarizing Thanksgiving treat came to be in 1912 when a guy named Marcus L. Urann wanted to extend the short shelf life of cranberries. Some prefer to make more elegant versions at home when Thanksgiving rolls around, but as for me, I want this delicious nonsense to be a sliceable, can-shaped, gelatinous blob. 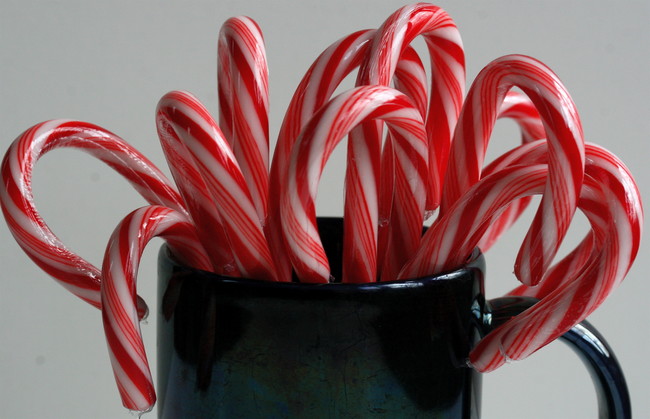 Candy canes were developed about 350 years ago, but they looked nothing like the striped, hook-shaped sweets that we know and love today. They eventually took on their most familiar form when a choirmaster curved them to represent a shepherd’s staff, and the red stripes were added in the 19th century when there were more vibrant dyes available. 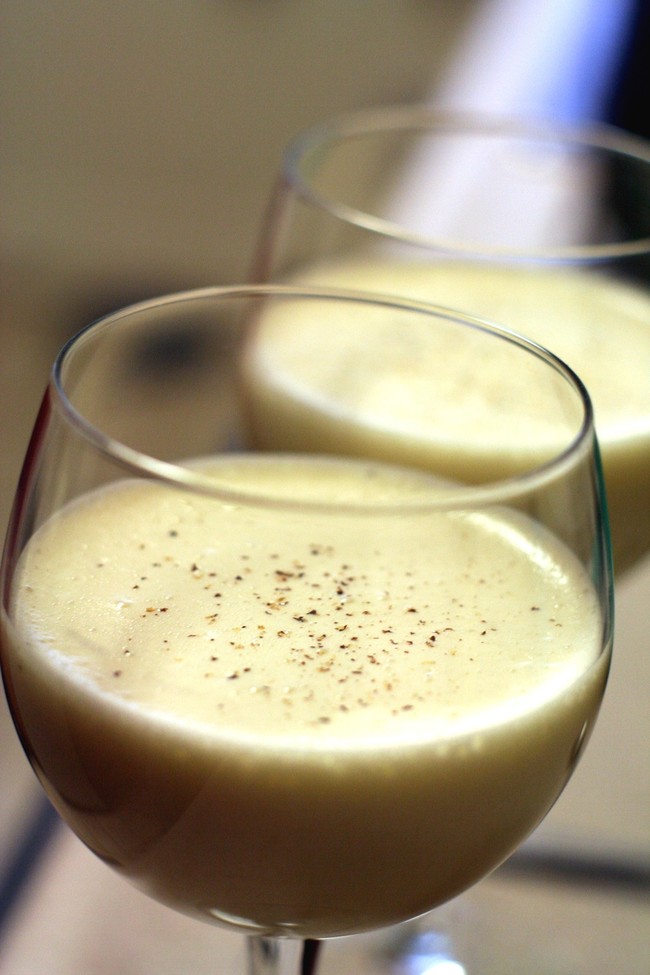 If you ever want me to avoid speaking to you until the end of time, offer me a glass of eggnog. While I find the stuff contemptible, plenty of people adore this holiday drink — and they have for centuries. Back in the day, members of the British aristocracy mixed warm milk, eggs, sweet spices, and various liquors to create the original version of this holiday staple. Because the ingredients were so expensive, it quickly became a symbol of wealth. It eventually fell out of fashion with the Brits, but Americans brought it back. We added our own spin by using rum instead of sherry. 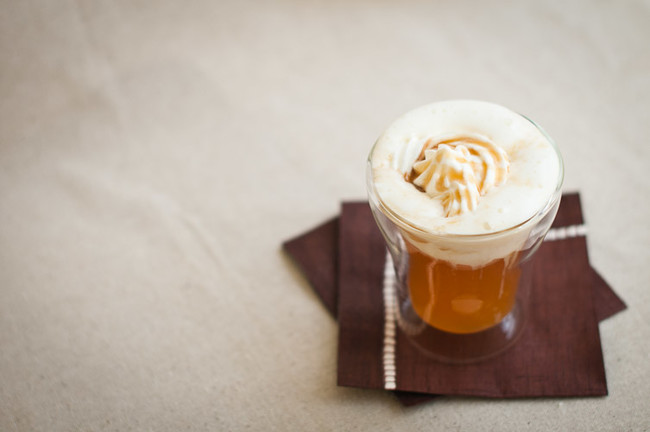 This is one of few holiday beverages that sticks around throughout autumn and winter, which is probably because it’s awesome. Originally an exclusively alcoholic drink, cider was created by the Brits back in 55 B.C., and it has been well loved ever since. With the advent of refrigeration technology in the 20th century, people were able to start drinking unfiltered apple juice, which meant that alcohol was no longer necessary in the process. While Americans refer to non-alcoholic, unfiltered apple juice as cider, the rest of the English-speaking world still associates the term with the alcoholic version. 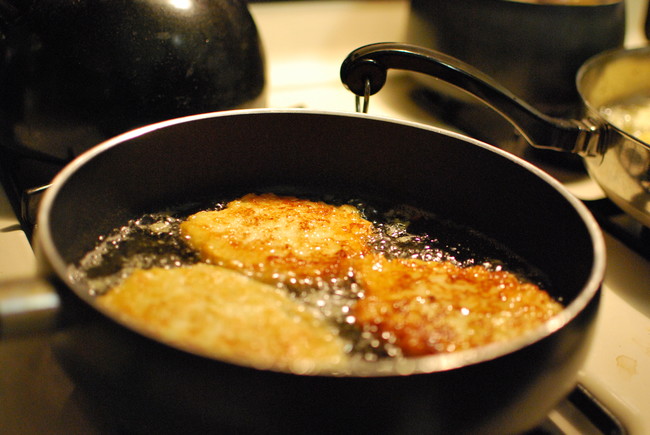 These Hanukkah favorites are absolutely amazing, and your opinion is invalid if you think otherwise. Latkes were originally just cheese pancakes (which are also too delicious for this Earth), but the addition of potatoes became popular in the 18th century. Because they pay homage to Judith — a Jewish heroine — latkes hold far more significance in the Jewish tradition. That being said, they’ve been known to show up on Christmas tables as well. 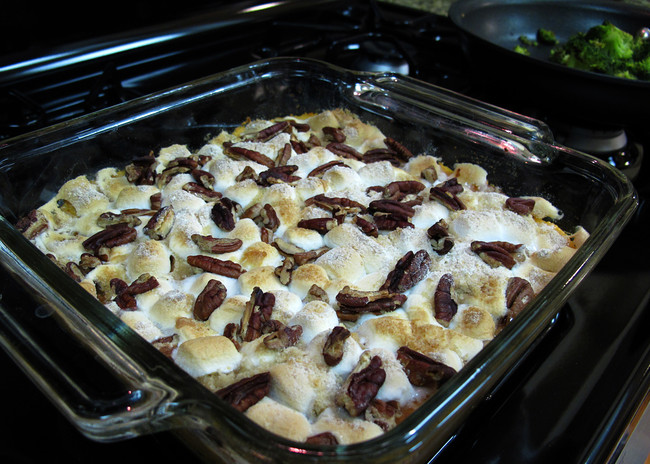 While this dish strikes fear into the hearts of many, tons of people love indulging in this sweet casserole. Cooking with marshmallows was trendy at the turn of the 20th century, and this particular recipe stuck after being featured in a popular cookbook by Angelus Marshmallow Company, which was printed in 1917. 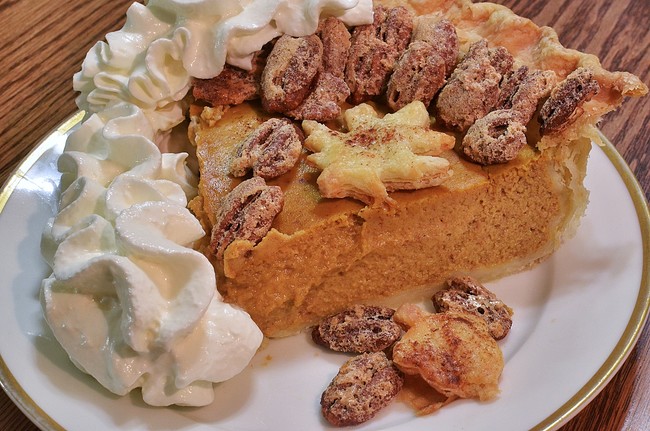 Pumpkin pie is the perfect Thanksgiving dessert. Everyone knows that. It’s science. The beloved pumpkin has been linked to seeds that grew about 9,000 years ago in Mexico, and it was eventually adopted by Native Americans. Boiling pumpkin and mixing it with honey and spices was a great way to preserve it back then, and some even suspect that the Pilgrims made a dish similar to pumpkin pie. They just didn’t use a crust. 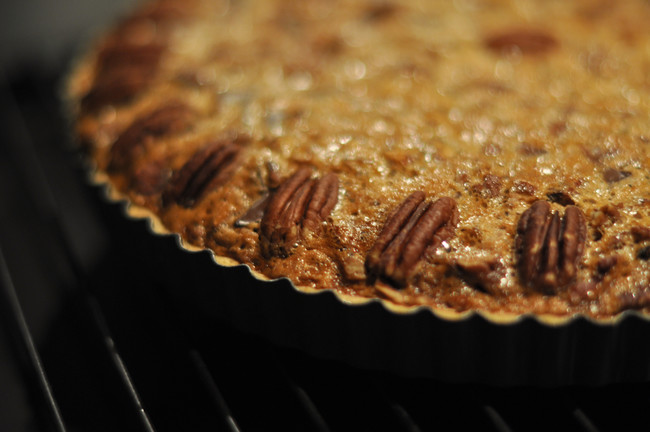 If you ask me, this amazing Southern staple beamed down from Heaven many years ago. If you ask people who actually know things about pecan pie, however, this dessert was first made in 19th-century Texas. Back then, the filling was a standard custard that was topped with pecans. The pecan pie that we know (and love way too much) today actually came to be in the 1930s when the wife of a Karo Syrup executive came up with a new way to use corn syrup…and we are all eternally grateful to that woman. 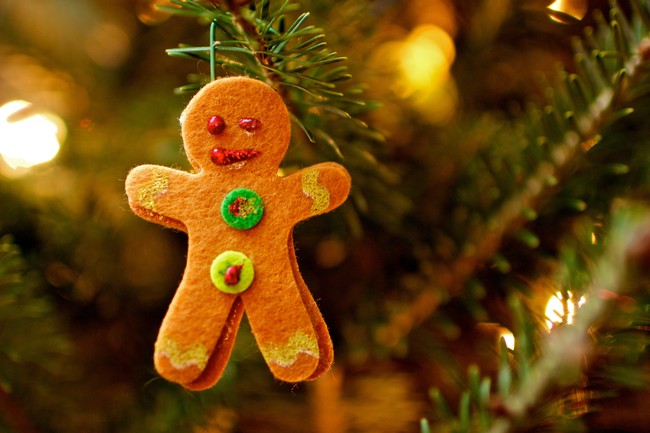 We might feel bad about decapitating these sweet, spicy cuties for a second, but once that epic flavor hits, all cookie carnage is forgotten. The recipe originated in Greece in 2400 B.C., and it eventually made its way to the U.K., where Queen Elizabeth I was credited with the tradition of decorating gingerbread cookies during the holidays. 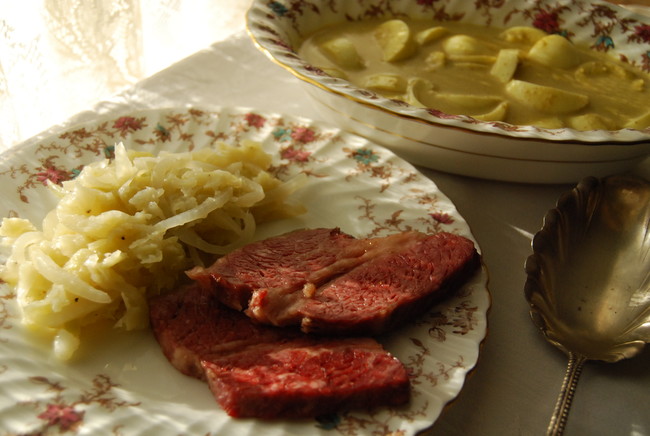 We have the Irish to thank for this one. This salt-cured dish was served on Christmas in Ireland for years, and it only makes sense that Americans eventually adopted the tradition. We do have a pretty serious amount of Irish-Americans floating around out there, after all. 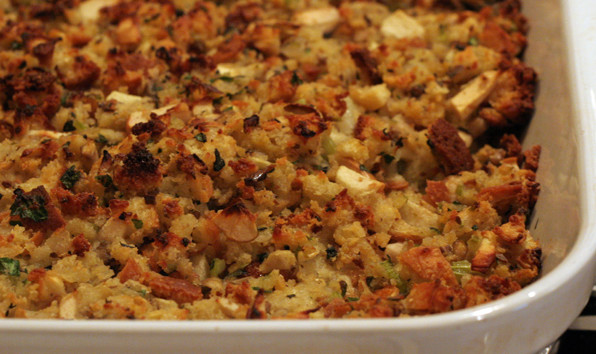 People have been stuffing food into animal carcasses for their own enjoyment for centuries now. One Roman by the name of Apicius even dedicated a recipe book to the many methods of making stuffing. Today, we prefer stuffing of the non-meat variety, which explains why we love putting bread inside of our Thanksgiving turkeys and serving it as a side dish. 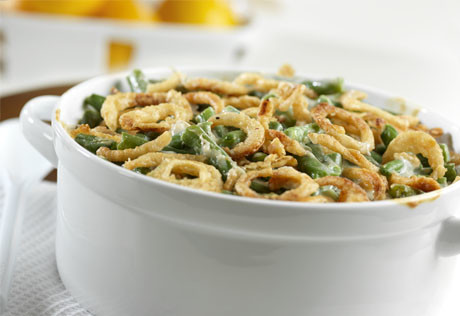 I eat so much green bean casserole on Thanksgiving that I’m pretty sure it runs through my veins for weeks after the fact. Americans have been eating creamed vegetables since the 19th century, and the traditional white sauce used in doing so was eventually replaced by cream of mushroom soup. In its current form, green bean casserole was popularized by Campbell’s in an effort to advertise their cream of mushroom soup. The deliciousness really caught on, and it’s said that Campbell’s makes about $20 million off of that variety alone on Thanksgiving each year. 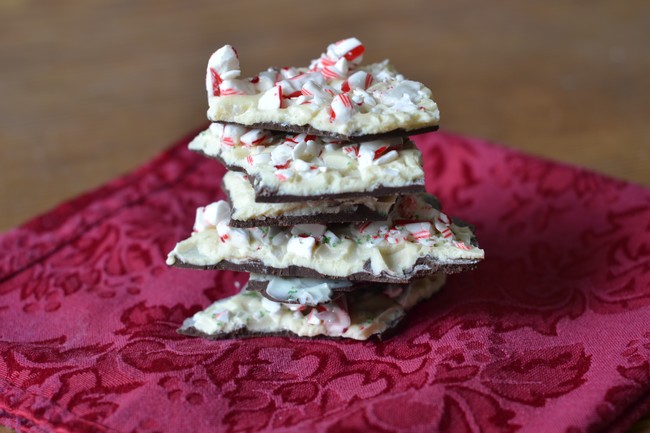 While no one knows exactly when people started sprinkling broken candy canes on chocolate, many agree that it was sometime between the ’60s and ’80s. Popular treat company Williams-Sonoma first sold peppermint bark in 1988, and they’ve been doing it ever since. They estimate that they’ve sold five million one-pound packages of the treat in the last decade alone. 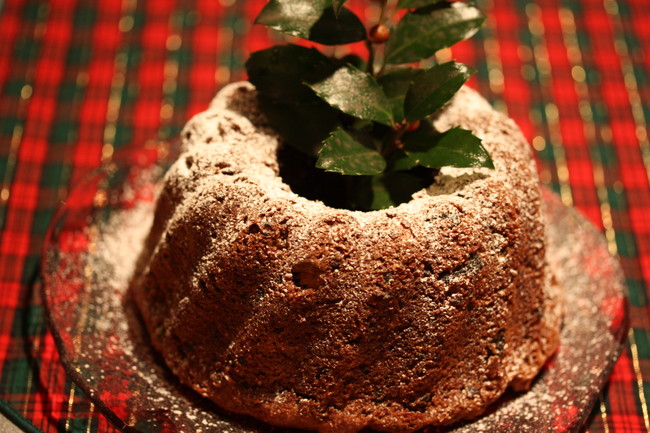 This originated in the U.K. in the 17th century. English Puritans banned the consumption of figgy pudding because of its high alcohol content, but those who knew how to get down loved it. Medieval lore dictated that this dessert could only be made on the 25th Sunday after Trinity Sunday. It originally included 13 ingredients, which represented Christ and the 12 Apostles. Today, figgy pudding isn’t seen on tables that often, but it remains popular in holiday songs.

Knowing where these dishes come from probably won’t change your opinion on any of them, but it’s still cool to think about the fact that many before you have gorged on pumpkin pie until they were about to explode.