You’ll Never Look At Movies The Same Way Again. These Before & After Shots Are Crazy.

It has been discovered that the average American watches television about 5 hours a day. That’s a lot of programming being consumed and that number doesn’t even include how many hours of movies we see in theaters or in our own homes. Every day we are being entertained, but every day we are being lied to (but not in a harmful way). Most people would never catch how it’s being done. Special effects and CGI (computer generated imagery) is a useful tool in the entertainment industry. Over the years, the techniques have improved. Now, when most television shows or movies use CGI, the viewers can’t even tell what’s real and what’s not… HINT: Most of it’s not.

Before: we see a green screen and a boom mic.

After: a cruise ship on the ocean.

Before: actor Andrew Lincoln riding a horse in a parking lot. 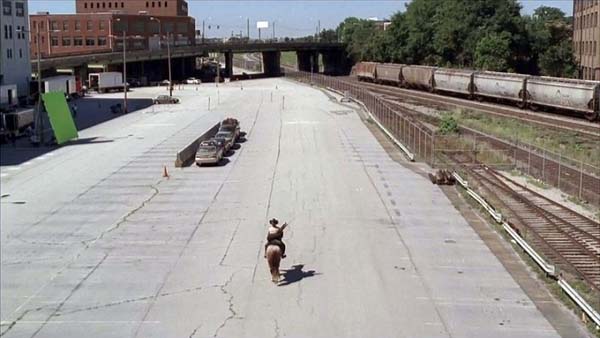 After: Rick Grimes riding a horse into Atlanta.

Before: a small soccer field.

After: a giant World Cup stadium.

Before: a private entrance into a house.

After: a private entrance that leads up to a mansion.

Before: tables in front of a green screen.

After: a bustling restaurant.

Before: two actors posing in front of a screen.

After: a scene in the middle of a city.

Before: a helicopter body in a parking lot.

After: the remnants of an apocalypse.

You should never trust anything you see in the movies or television shows. “Movie magic” has been around for decades, but now the magic is almost seeming… magical. Share these cool before and after photos by clicking below.