24 Epic Disney Secrets That No One Knew…Until Now. You Gotta Check This Out.

Because the animators spend an inordinate amount of time on each frame of each Disney film, they’re inevitably going to get bored. One way they alleviate this feeling of boredom is to insert little jokes and references into other Disney movies. That way, they’re both enhancing the experience and making the movie more fun for themselves.

Here are some little known Disney secrets to watch out for when you’re watching Frozen for the 68th time with your kids.

In “Brave” the witch who turns Merida’s mother into a bear has carved Sully from “Monsters Inc” into a log.

Dug from “Up” makes a shadowy appearance in “Ratatouille”.

The woman who voiced Malefecent in Sleeping Beauty…

Also voiced the Stepmother in “Cinderella”. They also kind of look the same, don’t they?

This specific frame in “Frozen” took 5 days to make. The mountains look good I guess?

Almost every Pixar movie mentions Apple because the company was partially founded by Steve Jobs.

The peddler at the beginning of “Aladdin” was supposed to be revealed as the genie. That’s why Robin Williams does the voice of both.

The muses of “Hercules” sing while appearing as marble busts during the song “I Won’t Say I’m In Love” positioned in the same way as the singing heads from the “Haunted Mansion” ride.

Mary Gibbs, the voice of ‘Boo’ in “Monsters Inc.” was a toddler during the making of the film. It was hard to get her to sit still in the studio so the producers recorded her playing and pieced together Boo’s lines using things she would say.

Ariel from “The Little Mermaid” is based of Alyssa Milano.

And Aladdin is based off of Tom Cruise.

In “The Lion King” tiger roars were used because lion roars are actually a little too quiet.

To save money, sometimes Disney had to recycle animations in different films.

…as the escaped criminal who keeps getting caught.

The reason many of the early Disney classics featured characters with mothers who passed may have been due to the guilt Disney felt about losing his mother. He bought his parents a home and a faulty radiator led to the death of Flora Disney.

Ursula the Sea Witch in “The Little Mermaid” is base off a popular 70’s drag singer named ‘Divine’.

Andy from “Toy Story” has a postcard on his bulletin board from Carl and Ellie from “Up”.

The vultures in “The Jungle Book” are based on The Beatles. They were supposed to be voiced by them too, but scheduling conflicts arose. (Why wouldn’t they be beetles instead of vultures though?) 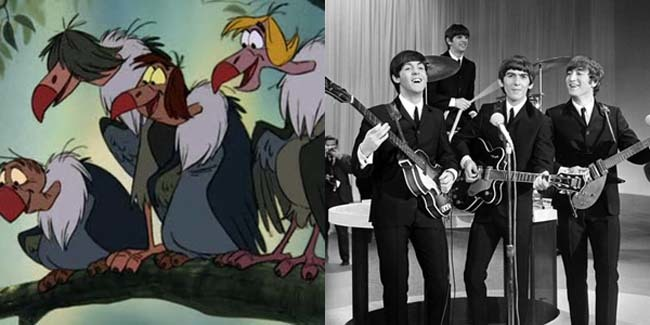 Scar from “The Lion King” is worn by Hercules in a scene where he is heroically being painted on a vase.

The evil, toy torturing ‘Sid’ from the first “Toy Story” is seen as the garbage man in “Toy Story 3”.

Disney comments on Kristoff’s assertion that all men eat their own boogers at the end of the credits of “Frozen”.

The sorcerer from Fantasia’s “The Sorcerer’s Apprentice” is named Yen Sid, which is ‘Disney’ spelled backwards.

I’ve watched almost every Disney movie multiple times, but I never caught any of this stuff. Disney…way to go!