A Giant Elephant Charged A Hippo And Her Baby. What This Mother Did Is Just Incredible.

The picture of this violent scene and mother’s heroism, taken by photographer Rian van Schalkwyk, in Windhoek, Namibia will make you catch your breath. A hippo and her round, innocent calf got a little too close to a bull elephant that was grazing nearby. The scuffle that took place between the two enormous animals was jaw-dropping.

This fully grown hippopotamus and her offspring got a little TOO close to elephants grazing nearby.

An elephant bull charged the momma hippo and her young. 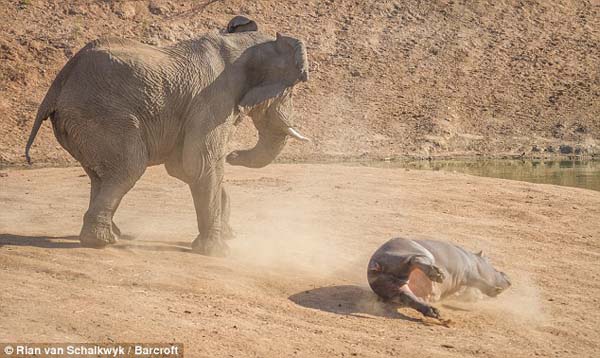 The mother bravely defended her baby. The bull flipped her with his trunk.

Luckily, although the fight looks bad, the hippo walked away with merely a scratch.

Every mother in the animal kingdom knows what is most important: their young.

Fully grown hippos can weigh over 1.5 tons, but the elephant tossed her with ease.

The baby hippo and her mom were quickly reunited and finished grazing off in the distance by themselves.

It just goes to show that even animals that big would do backflips for their young (even if they didn’t mean to).

Previous Post: An Autistic Man Was Having Trouble With The National Anthem. What Happened Next Gave Me Goosebumps.
Next Post: DySP suicide: BJP leaders protest against govt, CM