Academy president asks ‘elephant in the room’ to leave

Almost as if they’d planned it that way, the Screen Actors Guild awards presentation was a rebuke to the Motion Picture Academy’s dour announcement that it was “heartbroken” about the nomination of all white actors and would do something “immediately” to rectify the situation. In the meantime, SAG Awards went to Idris Elba, Viola Davis, Queen Latifah, Uzo Aduba, and other black actors.

Academy presidentCheryl Boone Isaacs has announced that the Academyhas alreadyvoted on a plan intended todouble the number of women and diverse members by 2020. Her long apology continued at a luncheon for nominees, where she announced the presence of an elephant in the room.

Did it? At least there wasn’t a mouse in the room. The real news of the afternoon?

The president had some good advice she might apply to herself.

Speaking of relaxing, it sounds like Congress will get to kick back Wednesday and enjoy a movie chock-full of white actors about thefinancial crisis of 20072008. 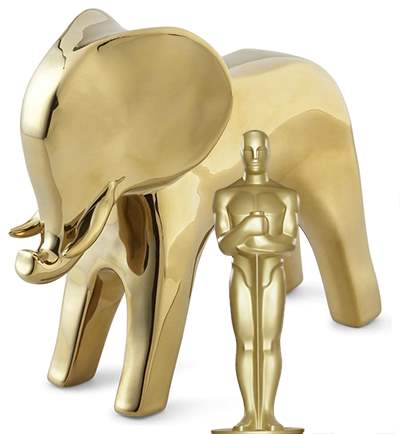