‘He Doesn’t Need To Be Told.’ Cops Spark Outrage In Arrest Of Young Autistic Boy

Children with disabilities go through a lot every day just to get by.

Not only is school more difficult for them, but they also face harassment and bullying. Some have trouble controlling their own behaviors. The people who work with these children have big hearts and a lot of training to deal with such behaviors, which can sometimes be violent.

John Haywood, who’s just 10 years old, has autism. He doesn’t like to be touched and has been known to have violent outbursts. He was expelled from his school and was completing the curriculum at home, but when his mother brought him in for some standardized testing, she got the shock of her life when the boy was arrested on the spot.

John’s mother recorded the whole thing, and it’s upsetting to watch. The boy is clearly confused and upset, but the officers refuse to tell his mother why he’s being arrested.

The charges stem from an incident six months earlier in which John hit and kicked a professional at the school and may have threatened them. The victim of the violence says they pressed charges so that John’s mother would get him additional help. 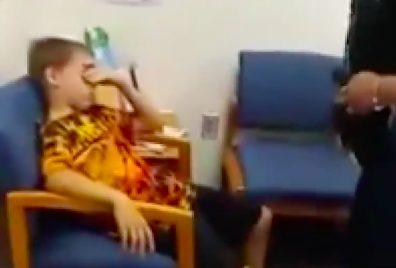 They wrote a letter asking for the charges to be dropped, but the state of Florida is now in charge of prosecution. “In this case, we are not seeking to give him a criminal record or anything of that nature,” state prosecutor Ashley Albright said. “The goal is to get the Department of Juvenile Justice and the state of Florida to provide some additional assistance and counseling for him.”

Read More: After The Love Of Her Life Committed Suicide, She Made It Her Mission To Save Others

The police department is coming under fire for their treatment of John, who like many autistic people, is sensitive to touch. He repeatedly asked not to be touched during the arrest.

In addition, people who work with autistic kids say that pressing charges against the boy is unusual. Many of the behaviors he exhibited, while certainly grounds for leaving the school environment, are common and require care, not arrest.

This is such a tough situation. What do you think should have been done? Let us know in the comments and share this to raise awareness about autism in children.

Previous Post: Allen West says Minn. Rep. Ryan Winkler should resign
Next Post: You’re Either Going To Find This Extremely Gross Or Completely Relate To It. Just A Warning.