You sat on the sidelines for years as Assad systemically slaughtered his own people in Syria. Pipe down. https://t.co/xCtH80DHqp

Former Ambassador to the UN Samantha Power is sorry, y’all, for not doing more to recognize the Armenian genocide:

I am very sorry that, during our time in office, we in the Obama administration did not recognize the #Armenian Genocide

Too little, too late:

I guess for 8 years it just slipped their minds… https://t.co/JujZkpbsz4

Remember when Obama promised to do so?

Obama had promised to recognized the genocide during his campaign, but he never did. https://t.co/yI3zvSiusp

This was a big broken campaign promise by Obama https://t.co/2coEtjEMvS 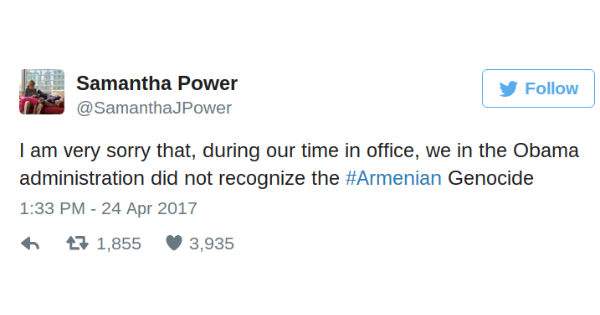