Seeing so many of Kusama's paintings in person was a dream come true. http://t.co/yMexoB60 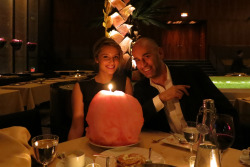 Gonna miss you tonight Mr. Viti, but will be wearing your shoes in honor of you. Remember our Four Seasons dinner & closing out the restaurant? With their crazy pink fluffy specialty?

Ah, the Four Seasons! Most typical young Americans head there instead of Taco Bell. Right before they jet off for a “whimsical” evening at Louis Vuitton.

Last night in #NYC, #LouisVuitton unveiled the Kusama inspired windows at the 5th Ave Maison. Can you spot the #Kusama? pic.twitter.com/AeOQaGK7

Unless they are dumb rubes, natch.

Hey, it’s not like she’s on a dreaded jet ski or something. Just a fancy pants Kennedy-esque boat and all. Totally typical!

No wonder President “Man of the 1 percent people” Obama outraised Mitt Romney in the oh-so-evil Hamptons. Richie-Richers are his “homeboys.“

Once again, the lame class warfare nonsense of the Left only results in exposing their own staggering hypocrisy. Who is out of touch again?