Things have taken another turn for the weird in the Roy Moore campaign. On Monday night, Moore appeared briefly before reporters to flatly deny the claims of Beverly Young Nelson, who, represented by attorney Gloria Allred, claimed at a press conference Monday that Moore had sexually assaulted her when she was 16.

That yearbook was central to a statement made by Moore’s attorney Wednesday afternoon — he says Moore is demanding that Nelson hand over the yearbook for handwriting analysis.

Moore attorney is demanding Gloria Allred provide campaign with physical copy of yearbook so their handwriting expert can analyze.

"Release the yearbook,'' @MooreSenate campaign atty demands after going to lengths to suggest accuser's yearbook greeting from him is a forgery.

Roy Moore's campaign is calling on lawyer Gloria Allred to release an old yearbook of a teen that he allegedly signed when he was in his 30s.
Bama.

A Senate candidate's lawyer demanding that a HS yearbook be relinquished to a "neutral custodian" really brings the year home.

There are so few scenarios where "release the yearbook" is something you want your lawyer demanding on TV https://t.co/7M1zIL7wF5

Moore’s attorney mostly used presser to demand Allred release the yearbook. “Look at the writing: Is it 40 years old or is it a week old?”

Wow: Moore's attorney is basically implying that Moore's signature was lifted from the accuser's divorce papers (he presided over the hearing) and put in the yearbook.

So…. This is a broad conspiracy centered on the fake yearbook signing. Man, I did NOT see this coming.

Man, I can't wait until the Moore campaign's handwriting expert delivers his opinion on the 1977 yearbook 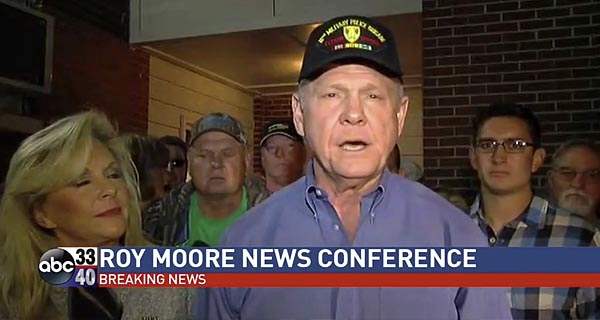