It’s estimated that more than 350 million people around the world suffer from depression.

Depression sufferers experience a variety of symptoms but one seems common — a feeling that they’re unable to escape their diagnosis. When asked, some people describe the feeling, likening the experience to being in a black hole.

In a world of so much light, these patients feel as though they are swimming in a never-ending realm of darkness. There’s no escape.

While speaking to a crowd of 400 scientists at a recent lecture, renowned scientist and esteemed professor Stephen Hawking discussed the technical nature of black holes. But it was how he connected them to experiencing depression that truly moved the audience.

Hawking was first diagnosed with motor neuron disease in 1963. At the time of his diagnosis, doctors gave him just two years to live. Now, more than 53 years later, Hawking celebrated his 74th birthday and shows no signs of slowing down.

During the course of his lecture, Professor Hawking described in detail how new thinking and scientific theories have shown that it’s possible to escape a black hole.

The professor tried his hands at unraveling the truth surrounding one of the largest unanswered questions surrounding black holes: what happens to the information that’s sucked in — and is it able to be found at a later time? He argued that indeed it could. You can find your true self on the other side.

What’s more, he concluded his lecture by saying: “The message of this lecture is that black holes aren’t as black as they are painted. They are not the eternal prisons they were once thought. Things can get out of a black hole both on the outside and possibly to another universe. So if you feel you are in a black hole, don’t give up – there’s a way out.”

Read More: This Woman Was Beautiful And Had A Great Life, But Depression Doesn’t Discriminate

While it’s easy to become lost in your situation, if you’re determined enough, there is a way out. 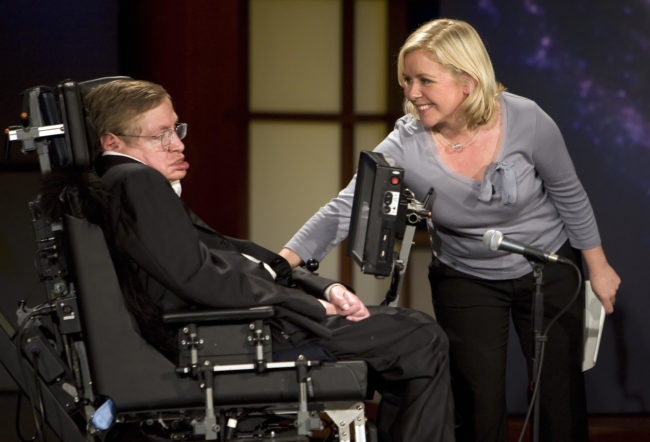 Also speaking at the lecture, Hawking’s daughter painted a picture of her father and his will to carry on that speaks to not only those suffering from depression, but any serious illness or disability. “He has a very enviable wish to keep going and the ability to summon all his reserves, all his energy, all his mental focus and press them all into that goal of keeping going.”

We can all learn a thing or two not only from Hawking’s comments, but also his own actions.

(via Daily Mail and IFL Science)

You can hear Hawking’s entire lecture regarding black holes over the course of two broadcasts on BBC Radio 4 on January 26 and February 2.

If you believe Hawking’s connection between black holes and depression hit the nail on the head, don’t forget to share his strong message with a friend.