What Happened To These Twins On A Highway In The U.K. Is Absolutely Insane

Some stories are almost too bizarre to believe, since the actions of the people involved in such stories seem to defy logic and explanation. Then, just when you think there’s a conclusion, everything twists and you’re left scratching your head.

While you probably haven’t heard too many stories like that, the tale of two Swedish twins on a trip to the U.K. certainly falls into that category.

Our story begins with police questioning a pair of women alongside a busy highway. A film crew with the police catches the interaction. Then, right in the middle of talking, one of the women makes a run for it and heads straight into traffic. 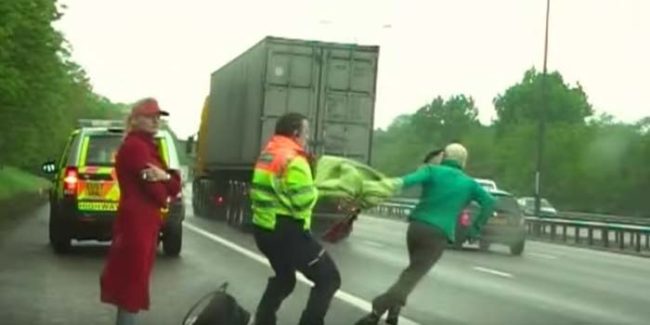 She is struck by a truck and seconds later, the other woman bolts as well. However, she doesn’t make it very far before being slammed by a car.

With both women lying in the middle of the road, police have to act fast to stop traffic, attend to the injured women, and then clear the roadway.

At that point, one is severely injured, but the one hit by the car could still walk. After regaining consciousness, she bolts back into the street.

Police needed extra help to finally subdue her and bring her back to safety. All the while, the woman continued to struggle and call out for the authorities. Officers at the scene suspected that she must have been high.

A few minutes later, they’re both taken to the hospital.

You can watch it all unfold in the video below. The footage is harrowing, to say the least.

Think this story can’t get any weirder? Well, it does. Turns out that the less injured of the two women was released from the hospital and spent a day in jail. The same day she was released from jail, police found that a 54-year-old man had been stabbed to death. Nearby, they also found the woman badly injured after she jumped from a bridge onto the A2 highway.

While more recent updates are hard to come by, I’m going to keep hunting.

Previous Post: WH fence jumper saga ‘gets even worse’; Can we count on these guys to help? [pics]
Next Post: That Awkward Moment When You're Trying To…