Anarchy ain’t pretty: Police reveal the faces behind the masks at Portland’s May Day riot

As Twitchy reported Monday, Portland shut down a permitted May Day march through the city when anarchists crashed the party and began hurling rocks, lead balls, and thanks to some inspiration from that since-pulled Kendall Jenner ad cans of Pepsi. They also set fires in the street, broke store windows, and trashed a police car.

After the smoke cleared (literally), police released mug shots of some nearly two-dozen people arrested in the rioting.

At least now we know why they wore masks https://t.co/GvMbFT6gpV

No kidding.Somebody get these people some bandanas.

@benshapiro And it's a MEGA burn! #FaceAche

@benshapiro Good God put the masks back on!!!!

@JackPosobiec Are they being paid in crack?

@benshapiro This would be a good anti-meth poster

@JackPosobiec Are you sure this isn't the "Faces of Meth" poster?

@benshapiro some great hairstyles in this group

@benshapiro It's like the horror version of the Brady Bunch.

@JackPosobiec Mostly white people being outraged on behalf of minorities. It's the same in the U.K. #Brexit

@benshapiro They're all variations of Rachel Maddow

@SociallySherri @JackPosobiec They are not sending their best.

@PortlandPolice It's 10 o'clock…do you know where your kids are, #Portland? If not, might want to check the city jail. #Antifa #MayDay 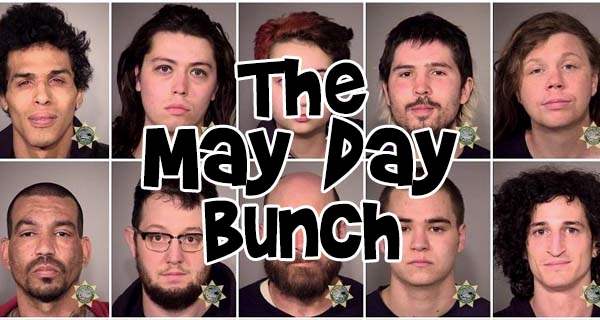