The easiest thing in the world to Photoshop is a white rectangle. Anyone with Microsoft Paint can easily cut away what was on the rectangle and replace it with new text. It takes no computer or design skills whatsoever. Which is why it’s never a good idea as a public person to go on TV and hold up a large white note card … like the one Kellyanne Conway held up last night during an interview with Sean Hannity to push back on charges of collusion between Russia and the Trump campaign:

This just happened on Hannity….. pic.twitter.com/nOYn7Th2aL

Her point was that there’s no proof of collusion “yet”:

Actual KellyAnne Quote: "What's the conclusion…collusion? No. We don't have that yet." "YET"………… https://t.co/uYkgf0bn0U

It was a fun segment and Kellyanne was delivering for Hannity audience, but that’s not how the media picked it up:

Which leads us to this morning and the #KellyCards tag…

Its all about the subtext, people. Gotta read between the lines. #KellysCards pic.twitter.com/SJAUOQsLNA

Kellyanne Conway is really getting to the bottom of this, guys. pic.twitter.com/zNhNHEx99w

I can't be the only one who thought of this but whatever #kellyscards pic.twitter.com/mdNgQlfIh0 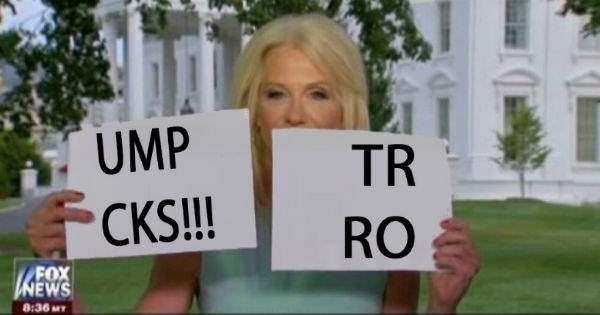 Previous Post: This Dog Was About To Fall Victim To A Python, But Something Unexpected Happened
Next Post: Parents Believe What The Dean Told This Student Is What Drove Him To Suicide