Burton, much-beloved “Reading Rainbow” host and visor-wearing Enterprise lieutenant commander, is taking a page from Obama’s Truth Team and other whiny celebs and going after Mitt Romney for pledging to end federal funding of PBS if elected. Since the debate,  he’s been on the warpath. Last night, he penned a “special message” about Meanypants Mitt’s crusade against Big Bird:

On behalf of America’s children, I can’t stay silent. I encourage you to join me in fighting this short sighted and frankly mean spirited attack on our children. Let your voices be heard through Facebook, Twitter, in emails and calls to the Romney campaign and in your votes. Reading Rainbow, Sesame Street, Mr. Rogers, The Magic School Bus, Arthur, Bill Nye and dozens more current and past beloved programs cannot be sacrificed.

Burton appeared this morning on CNN, where he discussed his “outrage” with Soledad O’Brien:

PBS is the nation’s largest classroom. It guarantees equal access to the wonderfulness that PBS has provided for almost 50 years in this country. And to callously, blatantly, say that it’s on the agenda to cut, is just — it is not okay. Because look, clearly this candidate — and I don’t believe that Mitt Romney is a bad guy — but I do believe that he believes what he said the other night. And I believe that his comment about the 47% is actually what he believes.

He also tweeted out this image of him “schooling” Romney. Because clearly, Mitt just doesn’t care about The Children and could do with a little re-education: 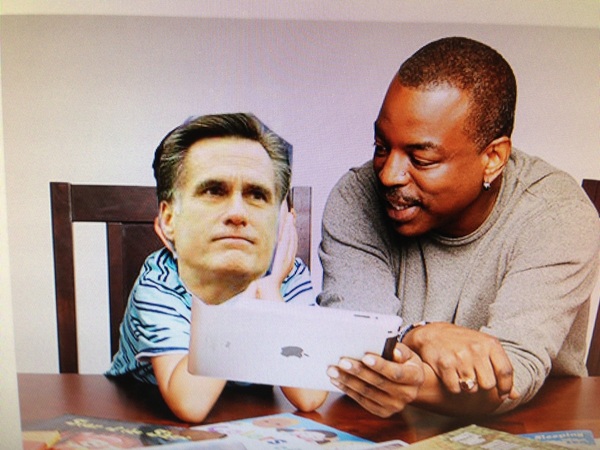 Most of Burton’s fans were thrilled that he’s taken such a vocal stand against Romney and Big-Bird-o-phobes:

@levarburton Good morning, LeVar. I couldn't agree more with this article. It's awful that he would even mention pulling funding on PBS.

@levarburton I will always vote for PBS, NPR, and rights for women. Which means Democrat.

@levarburton I really don't think Mitt watched PBS as a kid. If he did, he'd be able to tell the truth and do basic math

What kind of monster pisses off Levar Burton?

You tell 'em, @levarburton! Shows like Sesame Street & Reading Rainbow made me love to learn & interested in the World! http://t.co/yOv54rMk

@levarburton love it!! You rock!!

Levar is going 2 show he is actually black if u mess with PBS! Bahaha! @HuffPostPol: .@levarburton "outraged" at Romney's attack on PBS"

Uh, Bill Maher? Rachel Maddow? Is that you?

Not everyone saw a pot of gold at the end of Burton’s rainbow, however:

@levarburton hey levar, giv it a rest. we make cuts or we wont survive. we dont all hav YOUR kind of $. i hav kids, theyll survive w/o pbs

Kids won’t have to worry about living without PBS. As CEO Paula Kerger herself said, federal funding or not, PBS and Big Bird will be just fine.

@levarburton You're an alarmist and you should be ashamed. We both know PBS gets a small fraction of its $ from gvt.

@levarburton I lost respect for you due to your cnn interview. Romney did not say he get rid of PBS, just the 12% of fed funding among other

PBS can handle its OWN Business @levarburton still has his Star Trek Goggles on. #Blind2Truth

Some thought Burton could use a bit of help with his priorities:

@levarburton No offense to Big Bird, but to hell with PBS! What about those poor children having to repay over 16T in debt? #tcot #lnyhbt

This clever Twitterer pointed out that Burton has options if he truly wants to walk the pro-PBS walk:

@SooperMexican If only there was something well-off celebrities like @levarburton could do about PBS except complain. http://t.co/43qrJdg2

Bingo. If Burton values PBS as much as he professes, he is free to put his money where his mouth is:

Together, as a PBS supporter, we can offer trusted news and premier children’s programming today, tomorrow and in the future. Visit https://www.pbs.org/donate to make a tax-deductible gift today.

It’s time for Geordi LaForge to take off his visor and take a good look at his wallet — and reality.