These 10 Extremely Famous And Successful People Were Once Harshly Rejected. Here Are The Letters.

It is said that the road to success is paved with failure. That notion is completely true. Most people who are “successful” have faced failure time and again. However, no matter how many times they failed, those people just kept trying until they got it right. That’s the difference between someone who succeeds and someone who doesn’t. Failures will happen. You just have to know to keep trying. When these (soon to be) famous people received rejection letters, they didn’t let it get them down. Or if they did, they just used it to fuel their motivation… because they proved everyone wrong.

1.) U2: Bono, The Edge, Larry Mullen, Jr., and Adam Clayton formed their U2 in 1976 when they were just teens. In 1979, they submitted their first single to London-based RSO Records, who rejected them saying the music was “not suitable for us at present.” Within a year, U2 had signed with Island Records and released their first international single, “11 O’Clock Tick Tock.” 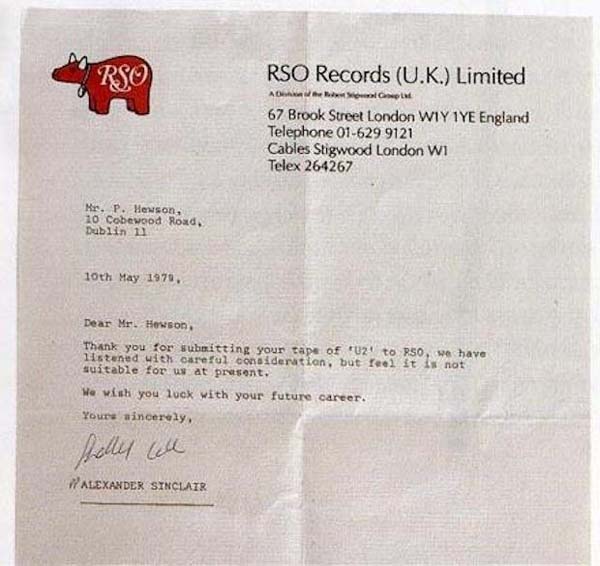 2.) Andy Warhol: In 1956, Andy Warhol attempted to donate his work to the Museum of Modern Art. On October 18th the artist received a letter rejecting the work “which you so generously offered as a gift to the Museum.” (Today, MoMA owns 168 of Warhol’s pieces.)

3.) Sylvia Plath: Howard Moss is The New Yorker editor that rejected Sylvia Plath’s Amnesiac. Although, he did admit that perhaps he was being “dense.” 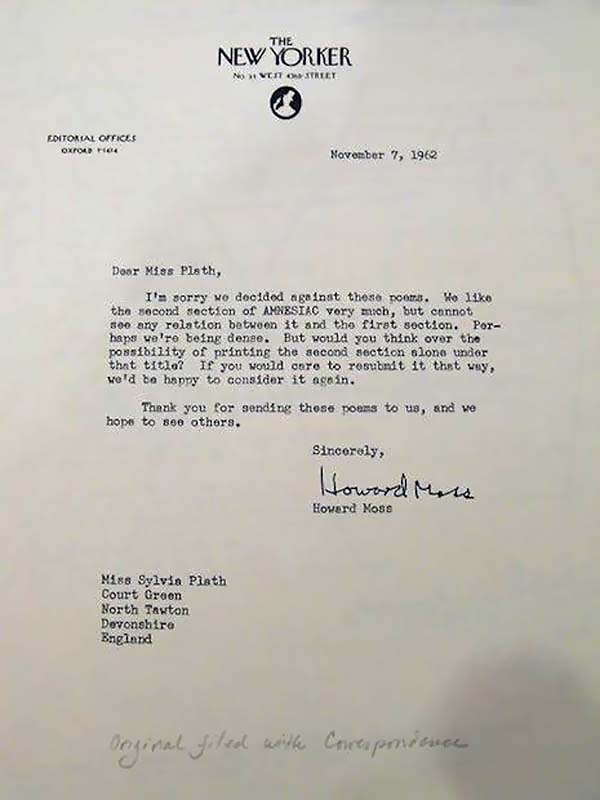 4.) Madonna: This rejection letter sent to Madonna’s team most likely took place before she signed with Sire Records in 1982, a year before she released her first, self-titled album. That album sold more than 10 million copies worldwide. Even though she was not “ready yet.”

5.) Kurt Vonnegut: Later an award-winning novelist, Kurt Vonnegut was often rejected. In 1949, he received a letter from Edward Weeks, editor of The Atlantic Monthly, who said his samples “have drawn commendation although neither one is quite compelling enough for final acceptance.” A framed copy of the letter hangs in Indianapolis’ Kurt Vonnegut Memorial Library.

6.) Tim Burton: In 1976, while still a high-schooler, he sent a copy of his children’s book, The Giant Zlig, to Walt Disney Productions for publication consideration. It was rejected, but a few years later, the company brought Burton on as an animator’s apprentice. 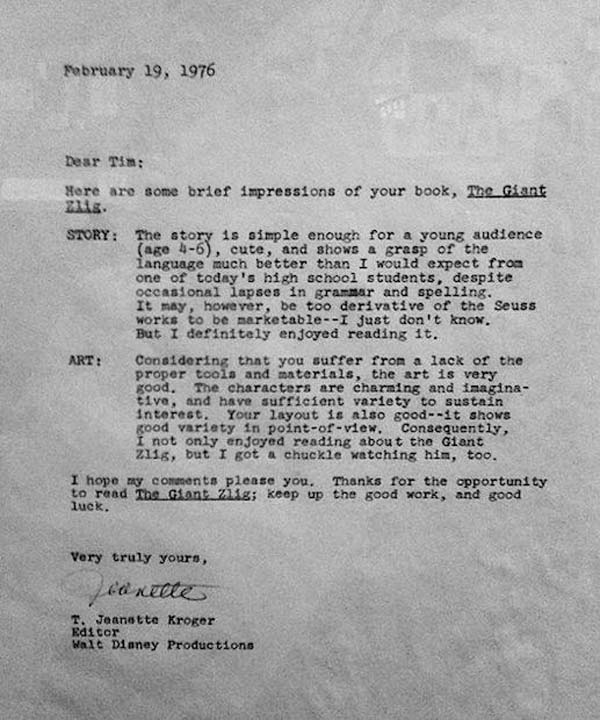 7.) Gertrude Stein: This poet’s prose was too dense for Arthur C. Fifield to even bother reading the full manuscript for The Making of Americans, which he declined in 1912.

8.) Jim Lee: Today, Jim Lee is an artist, a writer, and the co-publisher of DC Comics. In the mid-1980s, he was struggling to find his place in the industry, and was even rejected by Marvel.

9.) Stieg Larsson: This rejection to his application to journalism school in Stockholm at the Joint Committee of Colleges of Journalism was discussed by publisher Christopher MacLehose, who said, “This is a letter saying ‘you are not good enough to be a journalist’ to a man who went on to create a supremely creative, crusading magazine which fought against the worsening tide of extreme right thinking and activity in Sweden.”

10.) Hunter S. Thompson: Technically, HST wrote this rejection letter to William McKeen, author of a 1991 biography of Thompson (he wasn’t a fan). Thompson sent McKeen a handwritten review of the book (which William then framed).

If failure ever slaps you across the face, take a page out of Madonna or U2’s book. Don’t give up. Not everyone will like what you do, but eventually, you will find a way. Source: Mental Floss Even celebrities know rejection. Share these letters with others by clicking below.