They Turned An Unused Basketball Court Into A Patio, Complete With A Fire Pit!

It’s starting to get a little warmer out there, but not too warm — it’s basically the perfect temperature for some fire pit action. But outdoor furniture is so expensive! Unless you want everyone standing around a trash can fire, you’re going to have to get creative like Reddit user GregSolomon did!

Check out his step-by-step instructions to making a simple fire pit and benches — they look professionally done and are cheap enough that you can spend all the money you save on various BBQ meats and beer.

Here’s the plot that he started with. Since no one was ever interested in playing H-O-R-S-E, it was the perfect spot to build upon!

Making a fire pit like this is as easy as playing with building blocks as a kid…and just as fun!

To keep the flames away from the cement, he filled the pit with gravel, some bricks, and a grill cover.

Now for the benches! Using construction adhesive, he stacked and glued some cinder blocks onto each other like so.

He made sure they were lined up because beams of wood would soon be threaded through those holes.

Holes were drilled in the ends of each piece of wood. This would make room for piping to thread them all together.

The first beam is inserted!

Things are starting to come together.

Then they began threading the piping through the beams.

We have a bench! Although it doesn’t look terribly comfortable… 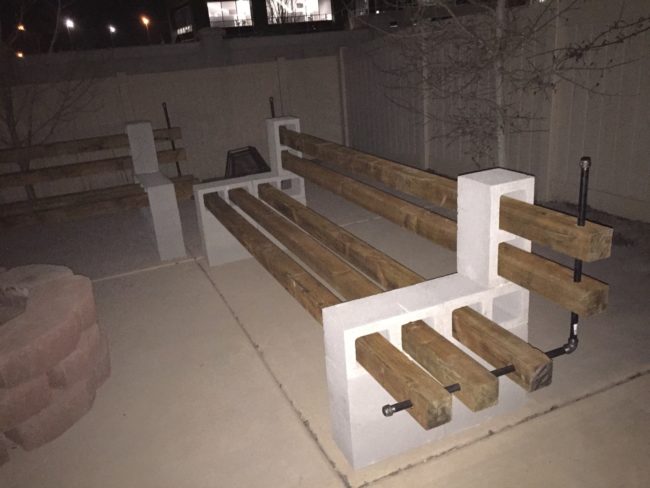 …so he added cushions and pillows! 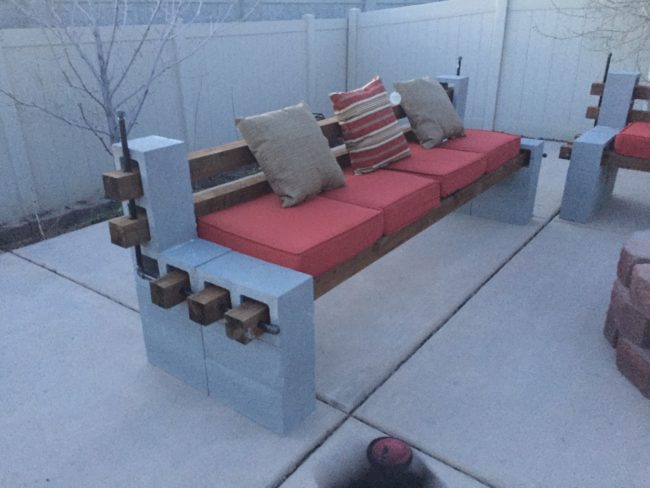 Just one question…you’re going to send us an invite to your first BBQ, right?